Department of Hygiene and Ecology №4

The department of food hygiene at Bogomolets National medical university keeps its chronicles since September, 1935.

The collective at department of general hygiene taught the food hygiene to students in sanitary hygienic faculty in KMI until establishment of independent department.

The active work on development and approbation of teaching methodology for main topics of the course was held within academic methodological terms, the sections of subject were formed.

The scientific work of teachers at department during the period before the war was directed to solve the following issues:

2. Study on prevalence of food poisoning in order to develop and to implement the preventive measures (assistant B.L. Gordin).

3. Grounds for use of methods on determination of oxidation-reduction potential for food products as an early index for their spoilage (assistant professor I.P. Barchenko).

One of aspects from scientific activity at department was the study of laws on origin and development of food poisoning. As a result from the researches the system of preventative measures was developed and implemented in UkrSSR.

Assistants B.L. Gordin and I.P. Barchenko defended the candidate’s dissertation due to materials of the abovementioned researches before the war.

Employees at department G.F. Pollak and B.L. Gordin took an active part in activity of laboratories at the institute of industrial hygiene and institute of food hygiene in joint development of urgent issues on food hygiene and performance of scientific researches; publish the methodological works on organization of sanitary-and-alimentary supervision in Ukraine.

Starting the academic process in the new place, the sanitary hygienic faculty did not have the sufficient amount of experienced teachers. 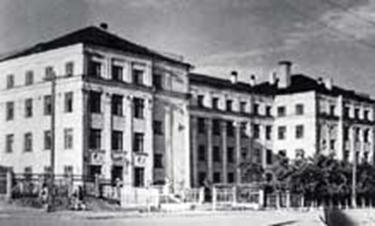 c. Cheliabinsk, building of former school, where KMI was located, in Komuny str., 35

It should be mentioned about self-sacrificing scientific work of assistant at department I.P. Barchenko. Under conditions of evacuation and great pedagogical load, at scientific support by professor P.I. Barannyk, he prepares and in 1943 defended the candidate’s dissertation “Oxidation-reduction potential as an index for spoilage of food products”.

After re-evacuation of KMI in August 1944 the department of food hygiene was restored within KMI. I.P. Barchenko was appointed to the post of head at department.

The working conditions of department, especially during the first postwar years, were very had. The department of food hygiene, as the significant part of special departments, was located in the adapted buildings; there was the deficit in premises, textbooks, and visual aids. Despite that fact the intensive work was carried out, the laboratory classes, anticipated by academic programs, were held in full manner. The departments were furnished with the new equipment, apparatuses and devices.

Gradually, from year to year, the equipment of department for performance of pedagogical work was improving.

In 1953 the staff of department consisted of 7 employees. Teaching is held in VII and VIII semesters. The number of lectures and practical classes was increased with implementation of the new curriculum in 1960. The state exam in food hygiene was implemented for students in sanitary hygienic faculty.

Ivan Petrovych Barchenko may be considered to be one of founders for food hygiene. He included a number of new sections into teaching program, namely: basics for sound nutrition, expertise of main food products, hygienic requirements to technology of their production, study about food poisoning and invasions.

The active scientific work was held under supervision of I.P. Barchenko: 6 dissertations (one doctoral and 5 candidate’s ones) were defended. The main directions in scientific researches at department were the study of vitamin and mineral composition of food products and food ratios in order to ground the rational nutrition of population; study on possibility to use certain vitamins and mineral elements within prevention of alimentary stipulated diseases; microbiological denaturation of food products as the basis for prevention of food poisoning.

Due to data from these researches I.P. Barchenko in 1953 defended the doctoral dissertation on topic “Food products as a transfer factor of the main geohelminthosis”. During postwar years the department became the leading center in the country on study and prevention of food poisoning with microbial nature.

The scientific and practical experience of department was generalized by I.P. Barchenko in “Manual on helminthological examination of food products and drinks” (1954) and “Course of lectures on food poisoning” (1969).

The results from researches of energy, food and biological values of main food products of animal and vegetative origin, held for many years, were generalized in “Tables for chemical composition of food products”. The versatile creative activity of professor I.P. Barchenko, his scientific authority, consolidation of activity of all food hygienists in Ukraine allowed him to prepare the monograph “Essays on history of national hygienic science about nutrition” (1975).

In 1972 professor I.V. Savytskyy became the head at department. At that time the urgent researches were devoted to study on influence of exogenic chemical substances, which are included into food products during their production, preservation, transportation and technological processing.

The works on hygienic assessment for food products of vegetative origin, which are grown using chemical plant-protecting agents, were made under supervision of professor I.V. Savitskyy, as well as the methods for determination of content of pesticides in products were developed, the hygienic assessment for use of vegetative food products, grown in the fields that were irrigated with waste waters, was provided.

The impact of substances, which migrate from natural and synthetic polymer materials that directly contact with food products, on food products was studied. The results from performed researches enabled selecting the materials and compositions, which corresponded to hygienic requirements, and widely implementing them in the spheres of food industry and trade.

The universal methodological scheme for complex study on polymer materials for food use was developed.

In 1987 professor I.V. Savitskyy invited professor V.I. Tsyprian, who was the hygienist of wide profile and until that time worked at departments of communal and general hygiene, to the post of head at department. Professor V.I. Tsyprian actively joined to the process on improvement of food hygiene teaching. The methodological basics for teaching the following sections were developed under his direct participation: study on actual nutrition for different groups of population in Ukraine, hygienic requirements to modern technologies of production, preservation and sale of food products. The generalization of numerous data about reasons of food poisoning allowed developing the modern classification for food poisonings. Viktor Ivanovych took part in preparation of modern textbooks such as “General hygiene” (2000), “General hygiene” (1995), “Manual for laboratory classes on communal hygiene” (1977, 1990). The undoubted acquisition of professor Tsyprian V.I. is the issue of the first Ukrainian textbook “Food hygiene with basics for science of nutrition”, which was prepared under his editorship. The collective of authors received the State Prize of Ukraine in the sphere of science and technology (1997) for textbook “General hygiene”.

The direction in scientific researches of employees at department under supervision of V.I. Tsyprian (1980-2010) was related to improvement in specific action of food ration and diets at the expense of including the special food products and biological active additives, based on natural substances with parapharmacological properties (seed buds, sources of carotinoids, tocopherols and fatty acids from family w3, chicory, sprouted grain, alginates, siftings, genestein of soya, stevia, bioflavonoids) for primary and secondary prevention of alimentary diseases, provision with ecologically friendly nutrition. The significant contribution was made for alimentary prevention from antioxidant insufficiency of metabolic processes that arises under influence of radiation, adiposity, iron-deficient states and oncologic diseases. The principal novelty of those researches is confirmed by declarative patents and positive conclusions for applications.

The employees at department together developed the prescriptions and production technologies, set the safety indices and biological values for over 60 food products. The scientific practical developments were described in such editions as “Principles for healthy nutrition” (2001), “Preventive nutrition in oncology” (2001), “Biological active additives to food for prevention and complex therapy of occupational pathology” (2002), “Mammary tumors” (2003).

“The regulations about provision of injured and disabled people as a result from accident in production or occupational diseases with additional food” (2003) were developed for Social Insurance Fund.

In total about 190 works, including 9 textbooks and study guides, 6 monographs, were published, 7 author’s certificates and patents were received, and over 25 different methodological and informative materials were prepared for workers in sanitary epidemiological service.

He took part in development of Concept on State policy in the sphere of public nutrition in Ukraine.

The scientific school of Viktor Ivanovych includes 9 candidates and one doctor of medicine.

The significant achievement of department was the implementation of elective course “Science of nutrition” into academic process. This elective course enables students to learn the basics for physiological needs both of healthy and sick organisms in main nutrients. The course describes the consumption of dietary additives and special food products in clinical, dietary and clinical preventive nutrition.

This course is taught both in medical preventive and medical faculties.

Despite the history of department of food hygiene in KMI, being almost 50 years, the national textbook on this discipline was not prepared. The necessity in composition of such textbook was caused by formation of national peculiarities in legislative sphere and regulatory methodological provision of sanitary epidemiological services, stipulated by acquisition of independence by Ukraine.

Understanding their responsibility, the collective of department actively joined to preparation and issue of the first national textbook “Food hygiene with basics for science of nutrition” (1999).

Under modern conditions the development and improvement of food hygiene as a sphere in practical activity of sanitary doctors takes place very intensively. The decisions of national establishments, as well as international organizations, such as FAO WHO, directives by WHO Office in Europe, WTO requirements and decisions by Codex Alimentarius Committee influence on process for improvement in legal rules for realization of state sanitary supervision for food hygiene.

It required improving the theoretical and methodological basics for teaching food hygiene that stipulated the development and issue of the new textbook “Food hygiene with basics for science of nutrition” in two books (2007).

The authors of textbook were awarded with the prize from Academy of medical sciences of Ukraine for the best textbook on preventive medicine (2009) for arrangement of material at high scientific pedagogical level. 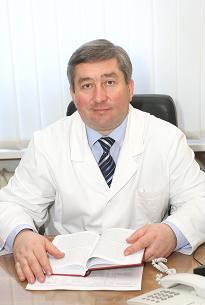 During its existence for 75 years the department had formed as a field-specific one that developed certain directions and traditions in teaching food hygiene, actively influencing on the significant changes in teaching the subject in other medical higher schools of Ukraine. The acknowledgment of the department’s authority was the fact that almost during 20 years it is the base for work of the Task group from AMS and MHC of Ukraine “Food hygiene” and commission on standardization and regulation of chemical and biological substances in food products and alimentary raw materials in Committee on issues of hygienic regulation at MHC of Ukraine.