The activity of student’s scientific circle was founded in 1948- 1949 and had great importance in learning of the theoretical course of forensic medicine. Normally 10-15 students worked in the circle. Since 1970 Professor Yu.S.Sapozhnykov was head of the circle, and then Professor І.О.Kontsevych and Associate Professor V.A.Shevchuk.

Yu.S.Sapozhnykov always said about the great importance of cooperation of the forensic doctors and lawyers for the prosecution of crimes against the life and health of citizens, and therefore scientific direction of work of the scientific student’s circle was criminalistic.

Students-members conducted their research in various areas. They had the opportunity to conduct research in the field of osteology, burn, fire, injury, the extent of traumatic force (M.M.Hait, G.Y.Braver, V.G.Viatchenko, V.G.Burchynskyi, V.Ya.Kondratenko).

To increase the level of theoretical knowledge, students-members carried out the analysis of complex forensic examinations, which was conducted by outstanding forensic experts during the investigation of serious criminal cases. 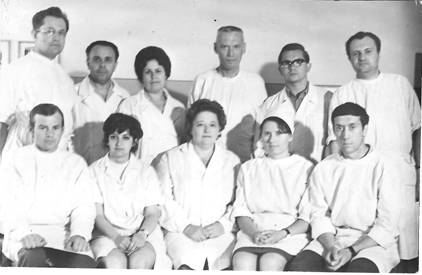 The staff of the Department with the students-members (1974)

Students saved the traditional forensic scientific direction of the circle and successfully developed problems of medical deontology. With the participation of faculty students prepared a series of such jobs as medical ethics and deontology and their legal norms, legal meaning of medical documentations, patient confidentiality in the legal and moral terms, responsibility of a doctor for professional offences. The students were very interested in these reports and in connection with it, in 1979 they organized the section “The doctor and the law” at the faculty students ‘ scientific conference of Kyiv Medical Institute; this section has become traditional and is an integral part of the general programme of the conferences of the student scientific society. 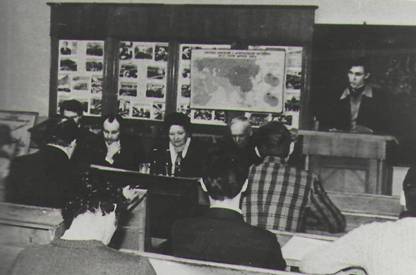 Many students took part in the Republican contest for the best student work. They prepared a series of reports under the motto of “Don’t Harm.” 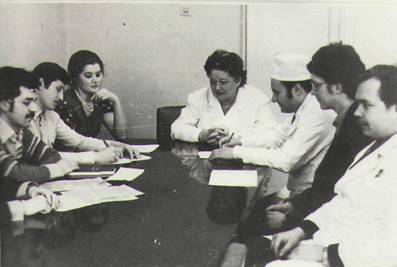 Professor І.О.Kontsevych conducts the meeting of the student scientific circle at the Deparment, 1981

Legal education of students played an important role in student scientific society of the Department of forensic medicine. During analysis the complex forensic cases students-members get information about Codes of Ukraine, litigation and they saw the role and importance of forensic medical examination of the preliminary investigation and in court.

It should be noted as positive the fact that the students-members of the Department of Forensic Medicine always and actively participated in student scientific conference of the faculty, Department, Institute, Republic, and research some of them (T.V.Khokholeva, L.L.Melnychenko) have got a high evaluation and were awarded with certificates and diplomas. Student scientific circle at the Deparment of Forensic Medicine was the school for many forensic experts, who work in different parts of our country.

ow assistant V.I.Khomenko is the scientific supervisor of the student’s scientific circle at the Deparment of Forensic Medicine. Students-members of the circle have the opportunity to participate in forensic autopsy (from 9.00 to 12.00 p.m.), to perform a planned scientific subject of the Department, to study the influence of meteorological factors on the onset of sudden death from cardiovascular diseases of inhabitants of Kyiv, conduct the analysis of violent death .