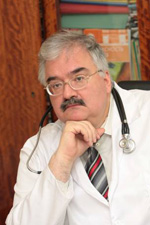 HEAD AT DEPARTMENT OF PEDIATRICS No 2,

CORRESPONDING MEMBER IN NAMS OF UKRAINE,

Volosovets Oleksander Petrovych was born on 26, September, 1961 in Lviv in the family of doctors. In 1962 he and his family moved to Kyiv. In 1978 he graduated from secondary school No 48 in c. Kyiv with the golden medal.

In 1978 he entered and in 1984 he graduated from pediatric faculty in Kyiv medical institute. During three years Volosovets O.P. was the chairman of students’ scientific society in pediatric faculty in Kyiv medical institute. In 1987 he and professor I.P. Koziarin organized the institute club «Young medic», where schoolchildren in city Kyiv mastered the basics of medical knowledge. Now this undertaking was transformed into Ukrainian medical lyceum at National medical university, which became the efficient way for pre-university training of youth.

During 1984-1986 he studied at clinical residency due to specialty “pediatrics” in department of children’s diseases No 2 in KMI. After graduation during a year he was working as a senior laboratory assistant in the same department. He passed through post-graduation training in medical school in Pennsylvania University and in children’s hospital in c. Philadelphia (USA). In 1986 he took part in evacuation of children’s population from exclusion zone, participant in liquidation of consequences from breakdown in Chernobyl NPP.

In 1990 he defended the candidate’s dissertation «Assessment on myocardial contractility due to data from ultrasound Doppler cardiography», where he in details described the peculiarities for functioning of the heart at various acquired pathology in children using the analysis of cardiac activity, which is based on Doppler effect. In particular, O.P. Volosovets was one of the first, who studied the issues on diastolic dysfunction in children at heart failure in details in the territory of the former Soviet Union.

Prof. O.P.Volosovets is a highly qualified teacher and organizer of higher medical education and health care. He is the author of more than 830 scientific works, 17 patents for inventions, 65 textbooks, manuals and 12 monographs. He created his own scientific school – he prepared 13 candidates and 2 doctors of medical sciences. Main directions of scientific research of O.P. Volosovets – children’s cardiorheumatology and allergology, problems of ecological pediatrics, ultrasound diagnostics in pediatrics, medical education.

Honorary scientist and technician of Ukraine (2009). In 2010 he became the corresponding member in National Academy of Medical Sciences of Ukraine. 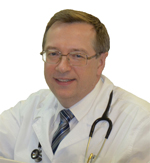 Kryvopustov Sergey Petrovich (was born in July 17, 1966) had graduated from the Kyiv Medical Institute in 1989 with a degree in Pediatrics. He studied at the Department of Hospital Pediatrics of the Kyiv Medical Institute on the specialty “Pediatrics” during two years. Then he received postgraduate training at the Medical School of the University of Pennsylvania and the Children’s Hospital in Philadelphia (USA) on Pediatric Cardiology, Pediatric Ultrasound Diagnosis and Neonatology.

Kryvopustov SP had defended his Ph.D “Functional state of myocardium in children with heart rate violation according to ultrasound doppler cardiography and echocardiography” in 1992. He had defended his doctoral dissertation “The state  of the cardiovascular system in children which have undergoned ante- and intranatal hypoxia, and pathogenetic correction of such state” in 1998.

Kryvopustov SP worked as a doctor at the Kyiv City Children’s Clinical Hospital No.2, and then became from an assistant to professor of the Department of Pediatrics №2 of the National Medical University named after O.O.Bogomolets.

He worked as a head of the research sector of the National Medical University named after O.O.Bogomolets from 1999 to 2003.

Consultant of Kyiv City Children’s Clinical Hospital №2. He has a higher qualification category in the field of Pediatrics, certificates of Good Clinical Practice. Passed a course on Theory and Practice of Evidence-based Medicine (USAID, 2007).

He is an active participant in scientific forums on pediatrics in Ukraine and abroad. He improved qualification in Austria (2002) on family medicine and neonatology, at the 40th Conference on Continuous Medical Education in Germany (2004), on scientific workshops on children’s respiratory diseases (France, 2003; Denmark, 2006, Czech Republic, 2007). etc.), at the 4th International Symposium on Rare Diseases in Pediatrics in Austria (2007), at the Pediatric Eurocongresses (UK, 2013, Italy, 2015, Romania, 2017), etc.

He is a member of scientific and methodological subcommittee on pediatrics of the higher education sector of the Scientific-methodical council of the Ministry of Education and Science of Ukraine. Member of the specialized scientific councils for the defense of dissertations at the National Medical University named after O.O. Bogomolets, State Institution “Institute of Pediatrics, Obstetrics and Gynecology of NAMS of Ukraine”. Member of editorial boards of 5 magazines. Member of the Scientific Coordination Council of the National Medical University named after O.O. Bogomolets. Member of the Board of the Association of Pediatricians of Ukraine.

He has over 650 scientific publications, among them books “Children’s Diseases” (1999), “Neonatology” (2000), “Diagnosis and treatment of urgent conditions in children” (2007), “Cephalosporins in the practice of modern pediatrics” ( 2007), “Macrolides in the practice of modern pediatrics” (2009), “Pocket Guide to Pediatricians and Family Physicians” (2010), “Problem-Oriented Pediatrics: Selected Issues” (2012), etc.

Since 2000 she is responsible for scientific activity at department. Member in Approbatory council of NMU on specialty “Pediatrics” and member in cyclic methodological commission of NMU on pediatric disciplines. She performs the practical classes at high methodological level, reads the lectures for students in III and IV courses in English. Scientific interests – allergology, immunology, rehabilitation. Consultant in department of allergology and department of rehabilitation treatment.

She was awarded with Charter of Honors by Kyiv city mayor in 2008. 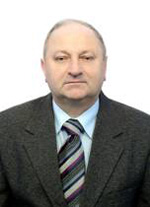 Graduated with honors from pediatric faculty in Kyiv medical institute in 1978, included into Golden Book of Respect.

According to the state distribution as an excellent student and active member in students’ scientific society, he was sent to clinical residency at department of children’s diseases No 2 in Kyiv medical institute. In 1983 he graduated from residency at the same department and defended the candidate’s dissertation on topic “Importance of clinical instrumental performances and activity of creatine kinase, lactate dehydrogenase and its isoenzymes of blood serum in diagnostics of acquired heart diseases in children”.

After graduation from residency on competitive basis he was elected to the post of assistant in department of children’s diseases No 2 in Kyiv medical institute. In 1994 he defended the doctoral dissertation on topic “Pathogenic medicamental and non-medicamental treatment of heart beat disorder in children”.

In 1996 on competitive basis he was elected to the post of assistant professor and since 2003 until now he has been working at the post of professor in department of pediatrics No 2 in National medical university. In 2005 he was awarded with the scientific title of professor.

Consults the children with cardiorheumatologic pathology and infant patients. 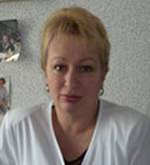 Author of more than 50 published works.

Has the highest qualification category in the specialty “neonatology”. The consultant of the neonatal intensive care unit of the Kyiv City Maternity Hospital No. 6. 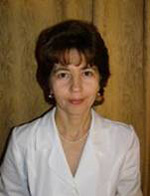 Main direction in scientific activity – neonatology. In 1995 defended the candidate’s dissertation on topic “Peculiarities for early adaptation of newborns to evidences of hypoxia at application of lipin”

She has the highest medical qualification category in pediatrics. She carries out the consulting work in infectious diagnostic division of KCCCH No 2.

She reads lectures on pediatrics to students in III-V courses in English, performs practical classes with students in 2-6 courses (in Ukrainian, Russian and English). 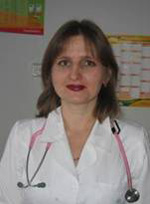 She has the highest medical qualification in pediatrics, carries out the medical consulting work in division for children of elder age in KCCCH No 2.

She reads lectures on pediatrics to students of III-V courses in English language, performs the practical classes with students in 2-6 courses (in Ukrainian, Russian and English languages), is responsible for teaching the discipline to students, who study in English language and organization of methodological provision with study to students in the 2 nd course. She is a participant in congresses, conferences in Ukraine, improved her qualification in occupational forums abroad, in particular, in Canada (1995), Austria (1999). 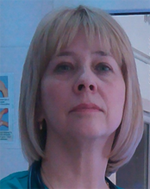 Shevtsova Tеtyana Ivanivna graduated from Kyiv Medical Institute, specializing in pediatrics. Associate professor, candidate of medical sciences. Neonatologist in Neonatal  Department of the Kyiv Maternity Hospital No 6. Responsible for working with a student’s scientific circle. At the department she performs duties for teaching and methodological support of 5 courses. 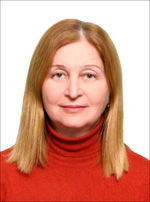 Grishchenko Nataliia Vasilievna graduated from Chernivtsi Medical Institute in 1982, pediatric faculty and started her career in the Lugansk  as a district pediatrician, a resident doctor, then Head of the City Children′s  Gastroenterology Department.

Since 1990, she worked at the Lugansk State Medical University as an assistant at the Pediatrics Department  and in 1992 she defended a Thesis for the Candidate’s Degree on the topic: “Clinical and immunological characteristics and treatment of viral hepatitis in children  living in an ecologically unfavorable region.”

Since 1997 Grishchenko Natalia -an assistant professor of Pediatrics with childhood infections Department.  From 2007 to 2014 she was senior teacher  for foreign students, the organizer of the All-Ukrainian Olympiad in Pediatrics for English-speaking students (2012, 2013).  Qualification by Children’s oncology and hematology raised in Austria (2012). Scientific interests – Children’s Gastroenterology, Infectious diseases, Pediatric hematology, Out-patient Pediatrics. 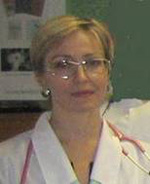 KhomenkoV.Ye. graduated from pediatric faculty in Kyiv medical institute in 1986. After residency she worked as a doctor- medical practitioner in pediatric division of Kyiv city children’s clinical hospital No 2.

At department she is responsible for academic methodological provision of the 4 th course. Author of over 60 published papers. Scientific interests – pulmonology and allergology of children’s age, pediatric Gastroenterology. She performs the medical work in division for children of elder age. She has the highest qualification category in specialty “Pediatrics”. 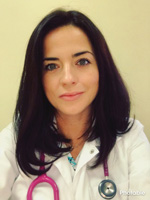 Mozirska OlenaViktorivna graduated from Bogomolets NMU in 2009. Since 2011 she studies in clinical residency at department of pediatrics No 2, since 2013 she works as an assistant at that department. In 2016 she defended the candidate’s dissertation.

Dziuba O.L. – chief doctor in KCCCH No 2. She has the highest qualification category in pediatrics and organization of health care.

Dziuba O.L is awarded with the Order of princess Olga. She has many letters of gratitude from CAHC and MHC, city and district state administration. 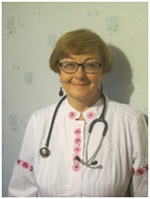 Candidate of Medical Sciences, Associate Professor. He studied at the Donetsk State Medical Institute. M. Gorky and after the end of clinical residency in 1987 defended his Ph.D. thesis on the topic “Functional state of the small intestine in kidney diseases in children”.

Consultant of the Department of Cardio Rheumatology, the doctor of the highest category 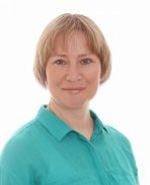 At department she is responsible for academic methodological provision of the 2 rd course, is the secretary of scientific-methodical meetings of the department. Author of over 30 published papers, 2 patents for invention. Scientific interests – pediatric Gastroenterology, pathology of children of elder age. She has the highest qualification category in specialty “Pediatrics”, specialization in pediatric Gastroenterology. She carries out the medical work in division of cardiology in KCCCH No 2. 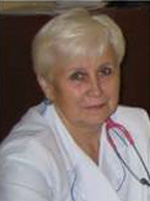 Author of 50 scientific papers, including co-author of guidelines for independent training of students in pediatric faculty “Endocrinology of children’s age” (1988) and “Respiratory diseases” (1988), section “Comatose states” in handbook “Emergencies in pediatrics” (1994), “Study guide on children’s endocrinology” (2004) for students in higher medical schools of III-IV accreditation levels, monograph “Differential diagnostics for symptoms of disorder in physical and sexual development at children” (2006).

She has the highest qualification category in specialty “Pediatrics”.

She performs the medical diagnostic work in Kyiv city children’s clinical hospital No 2 on issues of children’s endocrinology. 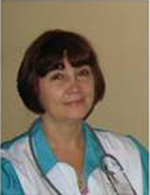 Doctor of the highest category in specialty “pediatrics” 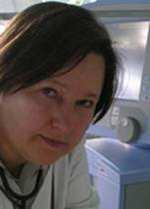 She has 34 published works 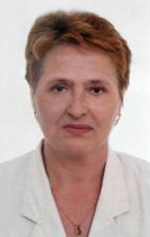 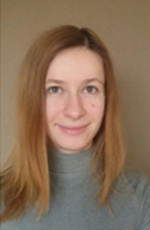 Graduated from Bogomolets NMU in 2011. Since 2013 she studies in clinical residency at department of pediatrics No 2. Since 2015 she works as an assistant at that department. In 2017 she defended the candidate’s dissertation. 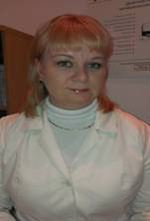