In the middle of 90-ies in XX century, in connection with rapid development of surgery due to implementation of high technologies into medicine, there arose the necessity in establishment of multi-field surgical department, at which all newest directions would be concentrated. This task was solved by the following steps. Firstly – foundation of clinical base (some bases) on the basis of modern medical establishments. Secondly – selection of teaching staff that had the working experience not only in general but cardiovascular, roentgen pre-vascular, laparoscopic, plastic and reconstructive surgery, as well as a large package of newest knowledge on problems in anesthesiology, emergency medicine, critical state and cardiology, the modern operation and postoperative treatment and rehabilitation of patient without which is impossible. Thirdly, appointment of the most perspective scientist and surgeon, who conforms to all abovementioned requirements and is able to organize the collective, academic pedagogical and clinical work, to the post of the head

Thus, the department of hospital surgery No 2 with the course of chest and vascular surgery was established since 1, July, 1998, according to decision from Academic Council in National medical university, dd. 27, March, 1997, pursuant to the order from rector Ye.G. Goncharuk No 46, dd. 14.04.1998, in order to improve the study of surgical diseases by students in graduation courses, for their learning modern achievements in general, plastic and reconstructive, cardiac, vascular and chest surgery, to enlarge the possibilities for qualitative training of specialists-surgeons at post graduation stage. The department belongs to the 3 rd medical faculty, is graduation and supportive one on “Surgical diseases”.

In 2008, in connection with implementation of Bologna process, the name of department of hospital surgery No 2 with the course of chest and vascular surgery was changed into “department of surgery No 4” (order by NMU No 86, dd. 17.03.08). 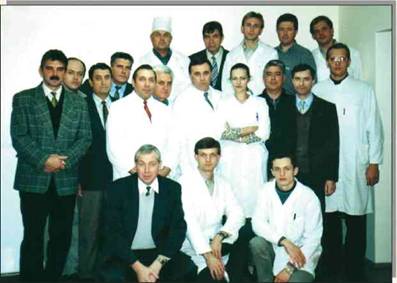 First collective of department in 2000

The clinical bases of department were at once located in medical establishments, which had certain profiling in necessary directions of modern surgery. The chief clinical base of department was deployed in Central city hospital in the city, where students could master theoretical knowledge and practical skills in modern equipped divisions of general and laparoscopic, cardiovascular, plastic and reconstructive roentgen pre-vascular surgery, which was later united into “City center of surgery”. The use of other clinical bases of department (City clinical hospital No 9, Chief military medical clinical center of MD of Ukraine) allowed performing the classes on issues of general, laparoscopic, cardiovascular, plastic, reconstructive surgery. Center of thoracic surgery, since 2010 on the base of Kyiv city clinical hospital No 17 and Republican clinical hospital of MHC of Ukraine since 2012.

The employees of department continue the traditions, which were launched by the predecessors, who in the past worked fruitfully at abovementioned clinical bases, in particular in Central (Zhovtneva) city clinical hospital (since 2008 – Oleksandrivska clinical hospital in c. Kyiv). Thus, since 1883 until 1903 the department of hospital surgery was headed by famous doctor-surgeon Fedir Karlovych Bornhaupt, who pupil was famous surgeon Mykola Markiyanovych Volkovych, who passed the way from resident to professor in Oleksandrivska (Zhovtneva) hospital, founder for Kyiv surgical scientific society. The historical backgrounds of our departments are the surnames of scientists at the world level – M.M. Diterichs, I.O. Zavyalov, I.P. Korkhov, A.K. Gorchakov, B.M. Gorodynskyy, M.O. Dudko. 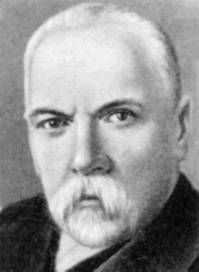 The special attention at established department is paid to the employment issue. Rector in Bogomolets National medical university academician Goncharuk Yevgen Gnatovych invited Doctor of Medicine, senior scientific worker Mishalov V.G., who successfully managed the division in scientific research institute of clinical and experimental surgery at AMS of Ukraine, to the post of the head at department. In his turn Mishalov V.G. invited a professor, assistant professors, assistants – experienced teachers, doctors, scientists and graduates from National medical university to the department. Each from teachers of new department had a certain experience in practical and scientific work not only in the sphere of general surgery but in narrower specialty, and a part of them had already been the heads in corresponding divisions. Thus, the composition of the first team at established department included: Doctor of Medicine, Mishalov Volodymyr Grygorovych, Doctor of Medicine, professor Burka Anatoliy Oleksiyovych, Candidate of Medicine, assistant professor Khrapach Vasyl Vasylyovych, Candidate of Medicine Markulan Leonid Yuriyovych, Candidate of Medicine Osadchyy Oleksander Illich; Candidate of Medicine Seliuk Viktor Mykhaylovych. The staff of department anticipated the senior laboratory assistant doctor-surgeon Goncharuk Oleksander Vasylyovych, laboratory assistant with medical education Samolyga Olena Oleksandrivan. 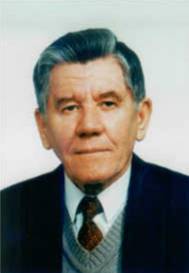 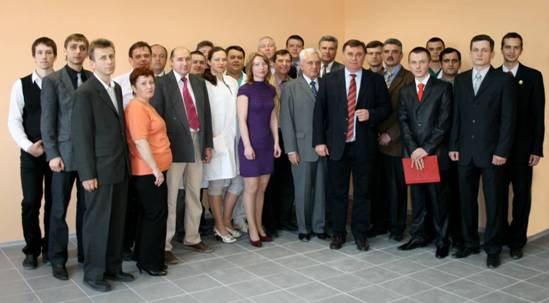 Collective of department in 2008

The peculiarities for formation of staff composition at department were the orientation for merger of academic and scientific process with health care establishments in Kyiv – thus, among teachers were all heads in surgical divisions of clinical bases (general and laparoscopic, plastic and reconstructive, endovascular, cardiovascular surgery, etc.), deputy chief doctor on medical issues and further – chief doctor, head at department – prorector on clinical work at university.

During six years the head at department professor Mishalov V.G. was the prorector on clinical work at university. During that period he organized the fruitful cooperation with city health care department at the background of help to practical chain of health care and improvement of conditions for learning of students. The group of employees at department under supervision of professor Mishalov V.G. for the first time composed the reference book for clinical bases of university in hard and electronic form. 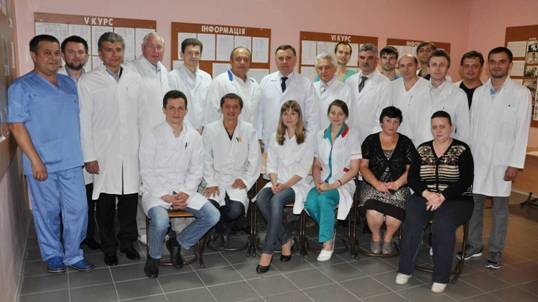 Collective of department in 2013.

he employees of department take an active part in the work of medical faculty No 3, which includes the department in academic and organizational methodological and educational terms. The dean’s office of faculty for that period was headed one after another by professor Lizogub Viktor Grygorovych, corresponding member in AMS of Ukraine, professor Maydanyk Vitaliy Grygorovych and professor Petrenko Vasyl Ivanovych, to whom we are grateful for overall assistance in the work of department.

As in each clinical department, the employees perform the following directions in the work: academic methodological, scientific, clinical, public.