Department of Surgery with a course of emergency and vascular surgery

Club was founded in 1998 since the opening of the Department of Surgery with a Course of Emergency and Vascular Surgery. From the first days the club became very popular among students of all years.

Academician Shalimov with the members of the department club in 2005

The students of the department club from previous years of study have already graduated from the University, have become real specialists, and in the majority continue to engage in scientific activity. Thus, the former head of the club Kostiantyn Kopchak has become a doctor of medical sciences, experienced surgeon; Iryna Rybinkina works as a doctor in the UK, Andriy Dinets studied in Sweden; another club members Yulia Bulatova works in the United States of America, Olena Voloshina has become a cardiac surgeon, passed her Ph.D. defense, Dmytro Unukovych defended PhD in Sweden and continues to work at the University of Carolina. It is worth mentioning that that most of the club members keep in touch with the department even after graduation.

Professor MD Vasyl Khrapach was the first supervisor of the club and still continues to cooperate with the club. Since 2019 Assistant Professor Pavlo Byk is the head of the club.

The subject-matter of the clubis aimed at reviewing the latest developments in abdominal, plastic and reconstructive, vascular, endocrine and thoracic surgery. Students also learn the basic principles of planning and conducting research, preparing scientific publications, and speaking at scientific forums.

During practical classes, each member has the opportunity to learn how to perform and improve the technique of basic surgical manipulations with animal organs, surgical simulators and try surgical devices.

University graduates, club members in past, became surgeons and scientists, working in medical institutions in Ukraine, the United Kingdom, Sweden and the USA. 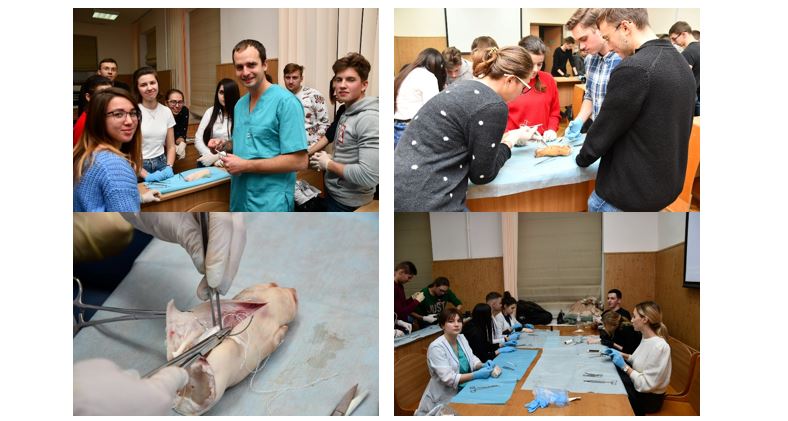 Working out by the clubbers of technique of suture application 29.10.2019

Joint Meeting with the Club of Plastic Surgery devoted to hemostasis

Collaboration with other clubs:

The student scientific club of the department of surgery with the course of emergency and vascular surgery actively cooperates with all scientific clubs of the university.

December 19, 2018 at the Department of Dermatology and Venereology, Bogomolets  NMU held a joint meeting of scientific student club of dermatovenereology and club of surgery with a course of emergency and vascular surgery on the topic “Hybrid methods in aesthetic medicine”

In 2020, 3 joint meetings of the SSC of Department of Surgery with the course of Emergency and Vascular Surgery and the SSC of the Department of Plastic and Reconstructive Surgery on the topics: “Surgical sutures”, “Student Scientific Club. Significance in the life of a doctor “and” Hemostasis in surgery “were held.

The main principle is to enable students to self-fulfillment, both in the theoretical, practical and scientific fields.