Department of Microbiology, Virology and Immunology

Long before the formation of the department of microbiology, in the second half of the last century within the territory of the Kiev university of St. Vladimir, the scientific researches were started in the field of microbiology. A private-docent V. V. Lukomskiy as early as 1875-1876 read the course of mycology in connection with the micro parasite theory of development of communicable diseases in a university. The works of professor of the department F.O. Lesha on diagnostics had a prominent role, who can be considered as the founder of medical protozoology (study of lamblias, balantidiasis, discovering in 1875 the pathogenic intestinal amoebae). F.O. Lesha’s student afterwards a prominent internist with world known 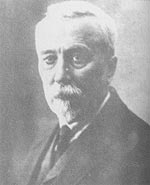 known name F.G. Yanovskiy was a founder of bacteriological laboratory at the medical faculty, he gave the detailed description of biological properties of typhoid exciters. A therapeutist Z.H. Zenkevich led to the microbial origin of infectious diseases. In 1884 he defended a dissertation for a theme: «A value of lower organisms in etiology of infectious diseases “. A surgeon M.M. Volkovich, regardless of Frish, opened and learned the exciter of rhinoscleroma (1888), which entered in literature as a bacillus of Volkovicha- Frisha.

Considerable was a contribution of a head of the department of pathoanatomy the professor G.M. Minkh in the study of virus of Siberia plague, leprosy, turning typhus. In 1874 G.M. Minkh infected himself with blood of patient with turning typhus, and by this proved the role of bloodsucking insects in the transmission of virus of the spotted and turning fevers. Oversea scientists reached this conclusion only 40 later.

Deep researches in industry of immunology belong to the professor V.K. Visokovich, a head of the department of pathoanatomy. He long before the opening of 1.1. By Mechnikov the phenomenon of phagocyte scientifically grounded the value of the reticulum system in the fight of organism against infectious virus; he found the connection between weight of infectious process and pathogenicity of virus.

The head of the department of general pathology V.V. Pidvisockiy educated the brilliant school of microbiologists (D.K. Zabolotniy, G.L. Savchenko and others). Professor V.V. Pidvisockiy organized the publishing house of magazine “Russian archives of pathology, clinical medicine and bacteriology” in Kyiv. 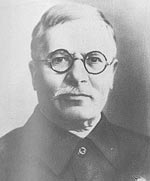 course was led by a professor Mark Petrovich Neschadimenko (1869-1942), and on Russian lecture course – a professor Alexey Antoninovich Krontovskiy (1885-1933), who entered in history of microbiological science as an author of studies about the culture of fabrics. Since 1920 a gradual association of two lecture courses began in unique Ukrainian lecture course that finally took place on September, 5, 1920, and instead of two departments the unique department of microbiology of the Kiev medical institute was created, at the head of which the doctor of medical sciences became professor M.P. Neschadimenko. He managed the department till 1941. 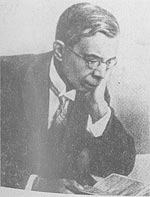 M.P. Neschadimenko was one of the first who studied influence of diphtheria on an organism. His doctoral dissertation “Experimental researches of disorder of circulation of blood at poisoning of diphtheria” was read in the Kiev university as early as 1910. Toxin – anatotoxin – antitoxin – here is that circle of questions of problems of diphtheria which developed department under the direction of professor M. P. Neschadimenko and assistant Yu. A. Kozlov. Prof. M. P. Neschadimenko was the initiator of using a toxoid for a fight against diphtheria. He experimentally proved the possibility of simultaneous immunization by two and more antigens: by the virus of vispovakcini and diphtheria toxoid, and also by TAB – vaccine, choleric vaccine and diphtheria toxoid. The idea of creation of the associated vaccines at the department later on was developed by (A.P. Frost, 1947; N.M. Volkova-Sharavska, 1950; L.I. Gerus, 1953; O.G. Tishko, 1964; L.G. Feschenko, 1965) The names of M.P. Neschadimenko is associated with introduction in Ukraine the antipathetic vaccine BCZH. In the circle of scientific interests of M.P. Neschadimenko entered question of creation of new methods of microbiological research, finding out of role of streptococcus to infectious pathology of man, fundamental researches from a meningococcal infection (together with S.S. Dyachenko).

During work on position of scientific leader of the Kiev sanitary bacteriological institute during a short time (1932-1933) the department was headed by the known microbiologist and immunologist doctor of medical sciences professor Vladimir Alexander Barikin (1879-1942).

During whole period of existence the department had the organizational changes only once or twice. Yes, since date of foundation and till 1936 it was a unique one in the institute. From the beginning of 1936-1937 school years the two departments of microbiology were created in the institute: one was the department of sanitary-hygienic and pediatric faculties, which was headed by a professor M.P Neschadimenko, and the second was the department of medical faculty at the head with associate professor A.M. Mar’yasheva (1886-1955). Such state of existence of two departments existed till 1941 when the beginning of Great Patriotic war was. 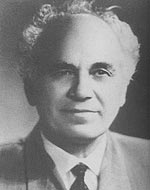 After liberating Kyiv from the German invaders on the 6th of November, 1943 and proceeding in activity the institute in Kyiv from December of 1943 the two departments again began to function: first – sanitary-hygienic and pediatric faculties at the head with the doctor of medical sciences by Sergey Stepanovich Dyachenko (1898-1992), and the second – medical faculty at the head with associate professor A. M. Mar’yasheva. But on November, 14, 1944 both departments were finally incorporated in one department for all faculties of the institute, which was led by professor S.S. Dyachenko.

During his work on position of a head the collective strengthened the department in scientific and pedagogical relations. Scientific contribution of Sergey Stepanovich makes 223 scientific works: among them 8 monographs and 8 popular scientific books. Him scientific interests were concentrated on such basic directions: 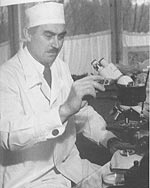 During 1973-1979 an honored inventor of Ukraine, a candidate of medical sciences, associate professor Vladimir Vladislavovich Gashinskiy carried out the duties of a head of the department.

V.V. Gashinskiy is a former student of the department, who made a way from its graduate student to an acting head of the department. Under his guidance and direct participation the original methods of research of microorganisms were offered: micro chambers for cultivation of bacteria under control of the microscope, new nourishing environments, method of determination of sensitiveness of bacteria to the antibiotics et al. On the example of his study of micro cycle development of spore-forming bacteria it was proved the phenomenon of auto regulation of ontogenesis of bacteria, the repeated cycle of spore-forming bacteria was reproduced (V.V. Gashinskiy, V.G. Voycekhovskiy). The detailed researches were carried out with a use of substitute of agar-agaru – to the strata gelose basis of which is poliacrilamid gel (V.V. Gashinskiy, V.G. Voycekhovskiy, T.I. Kraynyukova I.P. Bil’ko, V.V. Onischenko, O.V. Prokhvatilo, L.V. Avdeeva and other). These researches were protected by many copyright certificates and patents, and the basic developer V.V. Gashinskiy was honored with a high rank «Deserved inventor of Ukraine”.

Ever since 1979 till the present time the department is headed by the doctor of medical sciences, professor Vladimir Paulovich Shirobokov. 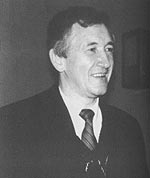 Scientific interests of V.P. Shirobokov are first of all connected with virology, in particular, with retrovirus the study of which an academician devoted considerable part of the scientific way. The candidate and doctor dissertations carried out at the department under his guidance are devoted to understanding the deep molecular genetic bases of structure and function of viruses. However the bacteriology also does not remain aside – lately attention of V.P. Shirobokov was attracted to the problems of normal micro flora of man and possibility of correction of its violations with the help of probiotics. Under the direction of V.P. Shirobokov the department grew into a powerful scientific center, equipped according to the last requirements of modern research practice. 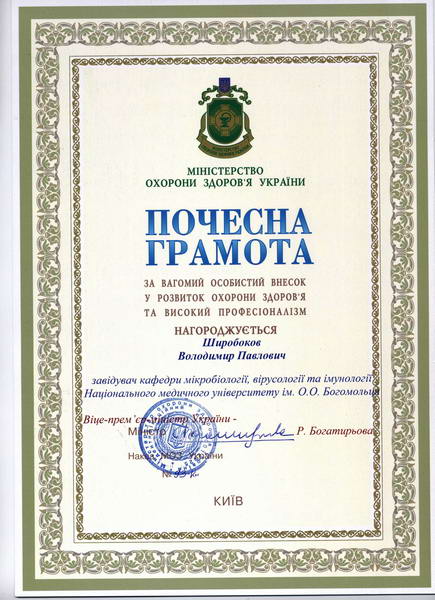 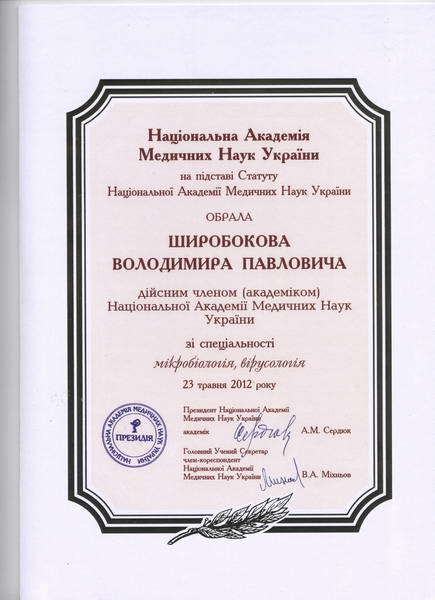 Academician Diploma of CAMMC of Ukraine 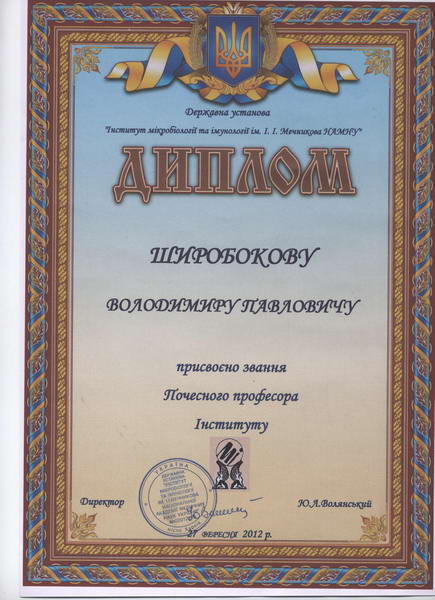 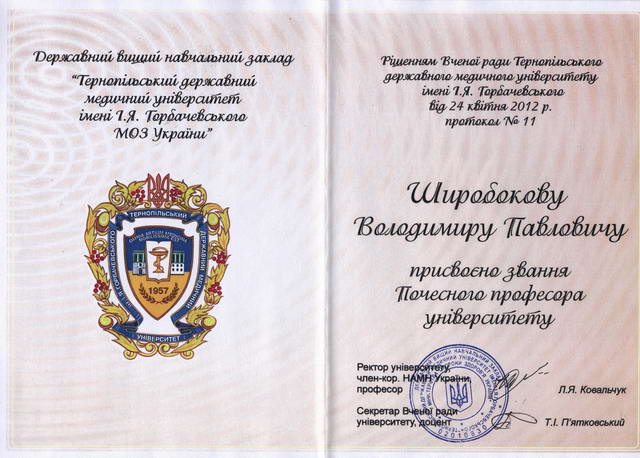 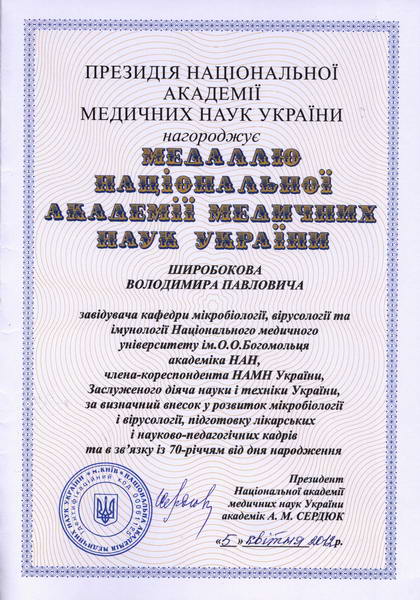 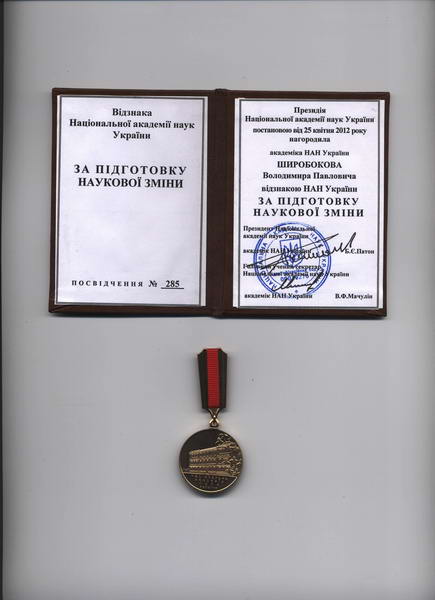 Honor-Medal of Academy of Science of Ukraine 2012 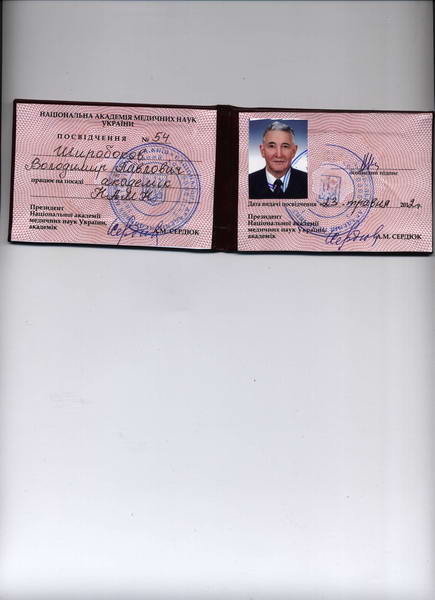 Academician paper of Ukraine Academy of Science and Health